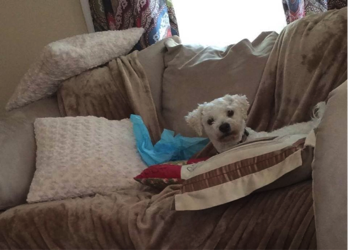 Adopted August 2015, Sir Cory is doing great. We just love him so much. He is a spoiled little pup. And, he is a funny little guy. His new thing lately is chasing lights- last week he started barking, and I couldn’t figure out why. Well, eventually I realized that the sequins on my sweater was reflecting off the ceiling and walls, and he was staring at them. So I began moving around and he was trying to catch to light reflections, lol. It was adorable. He is such a playful 5 yr old!! I attached some cute pics of cory lounging…he loves to play, but he also loves to lounge and snuggle:)