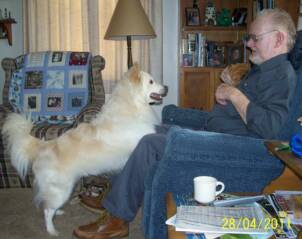 I just wanted to let you know that Buster, now Kodi, is doing fine.  He is a great companion, learns quickly.  He wanted to play with his rope, would drop it in my husband’s lap, sit and look at him, if it took too long he would just  softly “arf” and Paul would throw it – this went on for probably ten min.  I was laughing so hard I couldn’t finish what I was doing. He loves to ride in the car with just his nose out the window (locks on window)  He has to know where we are all the time.  He knows where the treats are and will sit by the cupboard door as if asking for one (not that he gets one every time)  Whoever had him before did a great job of training him.  He is a smart dog and a great companion.  Thank you very much- he definitely fits in well.