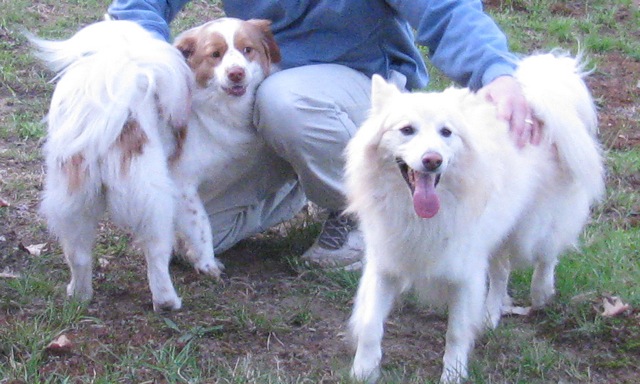 Kenny has now lived with us for a little over a year – what a great dog!  His nickname is “Prancy Paws”.  When Kenny is not running at full speed, he has a horse like strut that is very funny.  When we first picked him up, he bonded with my daughter during the long minivan ride back from New York.  They were very comfortable with each other even before we got back to the house.

Our other adopted dog, Callie, took to Kenny very well in the beginning but then we had a few problems because Callie did not know how to play.  Kenny always seems happy and likes to play with Callie.  She sometimes did not understand that he was playing and would fight back.  Kenny and I taught her how to play with him and now she knows how to and initiates it often.

We did not have much snow this last winter and Kenny wore a path in the grass all around the fence perimeter that faces the streets.  In the path I found about 10 Indian arrowheads.  The kids and the dogs love to play in the yard.  Today in the yard we saw two snake, five toads and two butterflies but Kenny was more interested in monitoring the fence line.  There have been a few times that we have lost site of our 3 year old son in the yard and every time Kenny was with him.  Kenny seems to have a herding instinct especially with the kids when I say it is time to go in.  They love that he stays with them when they wander away from us parents.

We get quite a greeting from Kenny and Callie when we return from work.  He jumps about three feet off the ground and spins in the air.  Kenny insists on playing with Peter every night, after the kids go to bed.  It makes both of them very happy.  Kenny is an excellent family dog, very tolerant of the kids and the cat.  He also knows who he can play rough with, Peter and Callie.

We hope that Kenny enjoys a happy life with us for an many years as possible.  Thank you Bonnie and Ed for fostering Kenny and sharing so many videos with us.