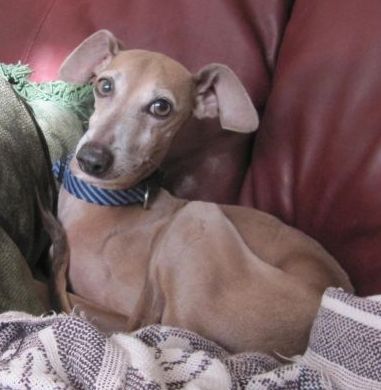 I just wanted to let you know that Jack is doing great, I love him dearly and that it was a great match.  Paul, my boyfriend loves him too and does evening walking duties.

Jack is not incontinent as his last owners stated.  He has had exactly three accidents and two of them were clearly my fault (a Christmas morning delay and one no excuse for me, that’s great for an Italian Greyhound.  He is never crated, there is no reason for it that I can see, he is not destructive at all.)  Jack does still have some fear at times, and hates the cold and rain.  He has the warmest coat and scarf I could find.  Jack still spends a lot of time on the sofa under a blanket.  I just met a neighbor on the street behind me who has an Italian Greyhound too and his does exactly the same thing!  I suppose it is reasonable if you are practically hairless.  He is pretty sedentary when it is cold and just wants to be close.  As the weather warms, or when it has been warm, he could walk forever and I will be bringing him to a dog park soon so he can run and be with other dogs. He’s been ok with that, but doesn’t want to be bothered too much with them.  I do think he wanted to be an only dog, he might be interested in another dog for a few minutes and then just wants to be with me.

He was a great companion and just right for me.  Thank you again for making my life whole again!