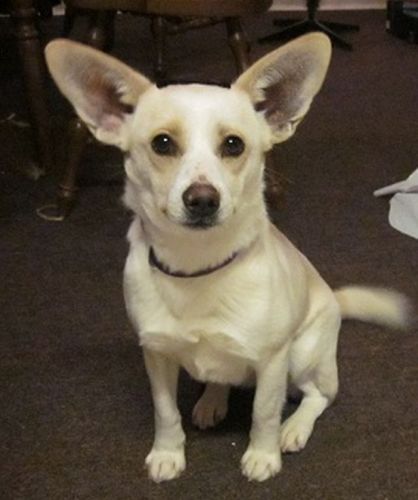 Everything is going really great! Hildy has already made so much progress with warming up since she has only been here 2 nights! She learned to use the doggie door immediately (she followed Flip’s lead which she has been doing a lot with everything) and she is actually out there right now playing with them. Every once and a while they come in covered in snow and then just go right back out. There was a bit of tension between her and Josie a few times inside, but they are working it out. Before they didn’t even want to go near each other because they were so nervous and now they are rolling around on our bed and outside in the backyard as if they have been friends forever. Last night we had a few people over and she did really well. She laid on the couch with me for a little bit, then got up with me to go outside and when she came in she went around and let everyone pet her a little. She is very happy, especially when she first wakes up, wagging her tail and standing up on us and she loves to follow us into the bathroom when we get up off of the couch. She has been eating just fine, but I think she could do better with that (she will only eat out of Kevin’s hand and if it is in a bowl or plate she just smells it), I think she is just a little unsure still. She has also been going to the bathroom outside regularly just fine. She keeps picking up toys and tossing them over a few feet then she goes and chases them. It is really funny. She likes to have us follow her into our bedroom and then she will jump on the bed and wait for us to come on the bed with her and when we do she cuddles very close. There has been a little bit of whining at night, but i think she just needs to adjust to being somewhere new. She is very funny with her habits. She likes to jump over Flip and Josie when they play, as if they are hurdles. It is nice that we have today and tomorrow off of work so we can leave the dogs together all day to let them get used to each other. It seems like all her and Josie needed was to get friendly with each other outside, for some reason inside there was too much tension. Maybe because it is a confined space and maybe they felt trapped around each other. But outside it is like they never had any problems. Hopefully after a couple days of that it will transfer to their inside relationship when they are more sure of each other.  Thank you so much! We love her, she is a great companion for all 4 of us!